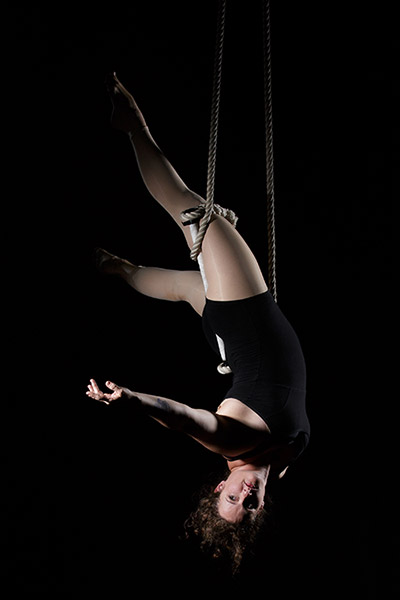 Heather first learned the art of trapeze and aerial dance in 1997 in New Orleans, and she’s had a hard time walking on the ground ever since.

Heather has been coaching aerials since 2006, teaching aerial silk, static trapeze, single point dance trapeze, lyra, and aerial yoga to adults and children. Heather co-founded and owned Miraas Aerial Arts (know known as Gravity Aerial Arts)  a Denver-based aerial studio where she was Creative Director and Lead Instructor from 2009-2013. In 2013 Heather moved to Honolulu and began teaching aerial at Still and Moving Center.  In 2015, she moved to Maui and founded Maui Aerial Arts and she is thrilled to have found her forever home.

Heather has taught workshops at Wanderlust Oahu, Aerial Cirque over Denver, L’Ru Studios, Still and Moving Center, and international at circus festivals.  She is also very active in international Social Circus and was an invited trainer for the  “Climbing Walls” Youth Circus Festival in Akko, Israel, and for the Makampom Theatre in Thailand.

She completed her Instructor in Circus Arts training from the Ecole Nationale de Cirque (National Circus School) in Montreal and her aerial teacher training from the New England Center for Circus Arts in trapeze, lyra, and silks.  She is also a certified Circus Arts Therapist through The Circus Arts Institute.  She has experience working with kids on the spectrum, refugees, and kids and adults with eating disorders.

Heather’s performance experience is diverse and includes working big venues like  the 1st Bank Center in Denver, The Maui Arts & Cultural Center;  medium sized venues like The New Orleans Children’s Museum, The Oriental Theatre in Denver, Cleo Parker Robinson Dance Theatre, Honolulu Museum of Art, and the historic Iao Theatre in Maui, and smaller theatre productions.  She has performed at multiple festivals on outdoor rigs and also skilled in ambient aerial for places small venues like eleven 44 in Chinatown in Honolulu, Bender’s in Denver, and others.

In addition to teaching aerial in the studio,  Heather has spent years traveling and teaching culture and human rights as a university professor. She teaches online classes for the University of Denver University College Global Affairs MA program and finds often finds inspiration for aerial productions from the intense dialogue about culture, privilege, power, and the shared traits of human condition that we all experience regardless of age, race, geography, and culture.  As a circademic, Heather has worked as a social circus aerial trainer in Israel, Palestine, and Thailand, teaching trust and peace through circus skills.  Heather uses her art form to benefit the nonprofits she advocates for by donating performances for events.  To date she has donated performances at fundraisers for to PETA, Planned Parenthood, Mental Illness Awareness Events, Heathly Mothers and Healthy Babies, and community collaborations, such as Adaptations Theatre’s Maui 2016 and 2017.  Heather has also co-choreographed with Amelia Couture a rope routine for Adaptation’s annual Bring it Home.  yearly show.

Heather is thrilled to be in Maui with her family, and they are very excited to make Maui their forever home.  When she isn’t teaching online or teaching aerial, she is hanging out with her daughter, husband, and dogs. 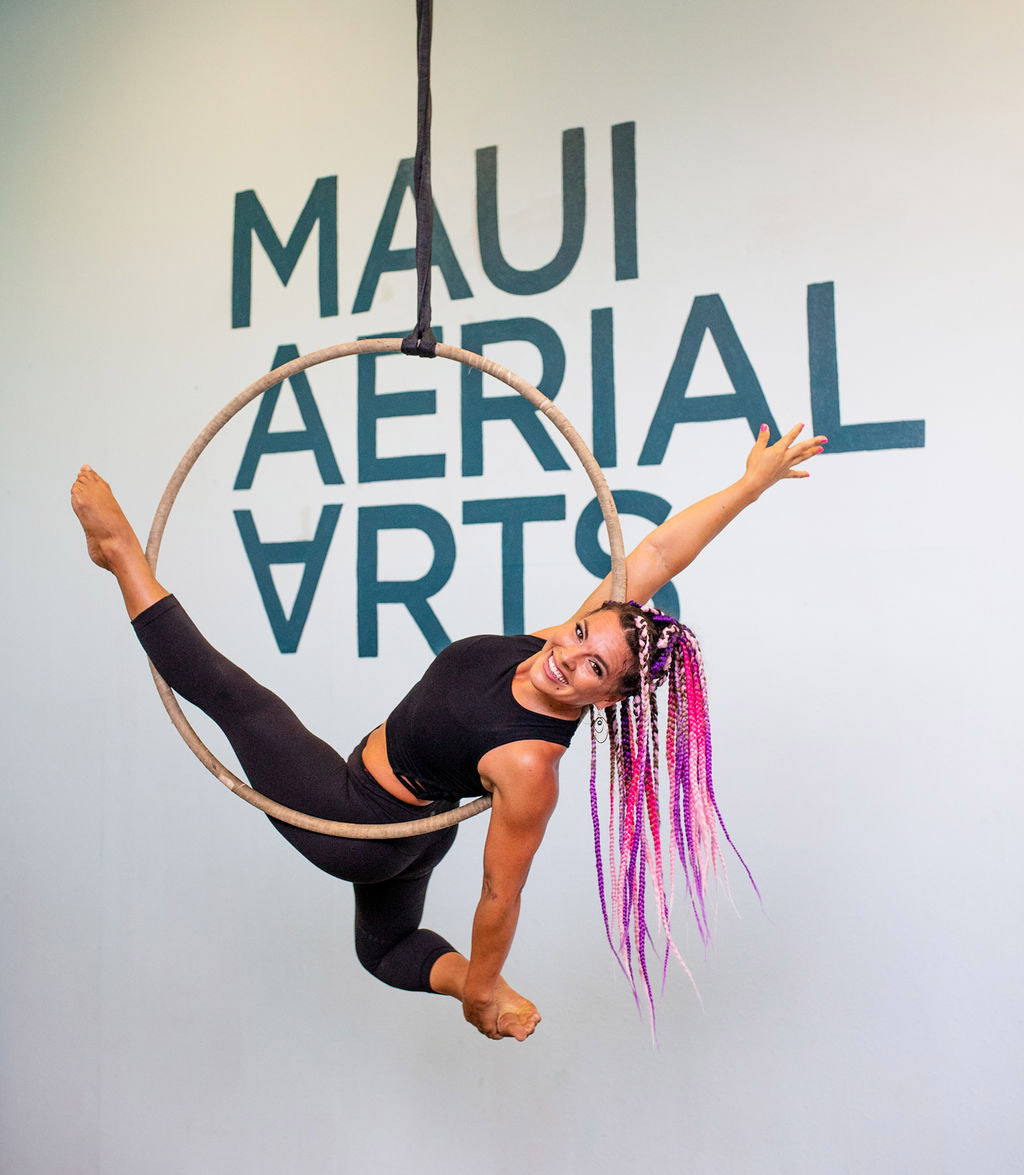 As a young gymnast, Amy learned to love being upside down.  She found circus arts in 2013 when she took her first flying trapeze class.  From there she accelerated into the world of acrobatics, aerial silks, lyra, and flying trapeze instructor.

Amy enthralls audiences with her powerful technique and unique grace.  Amy performs all over the island and is a cast member of ‘Ulalena.  Amy is also a lyra and aerial yoga play instructor at Body in Balance in Lahaina. 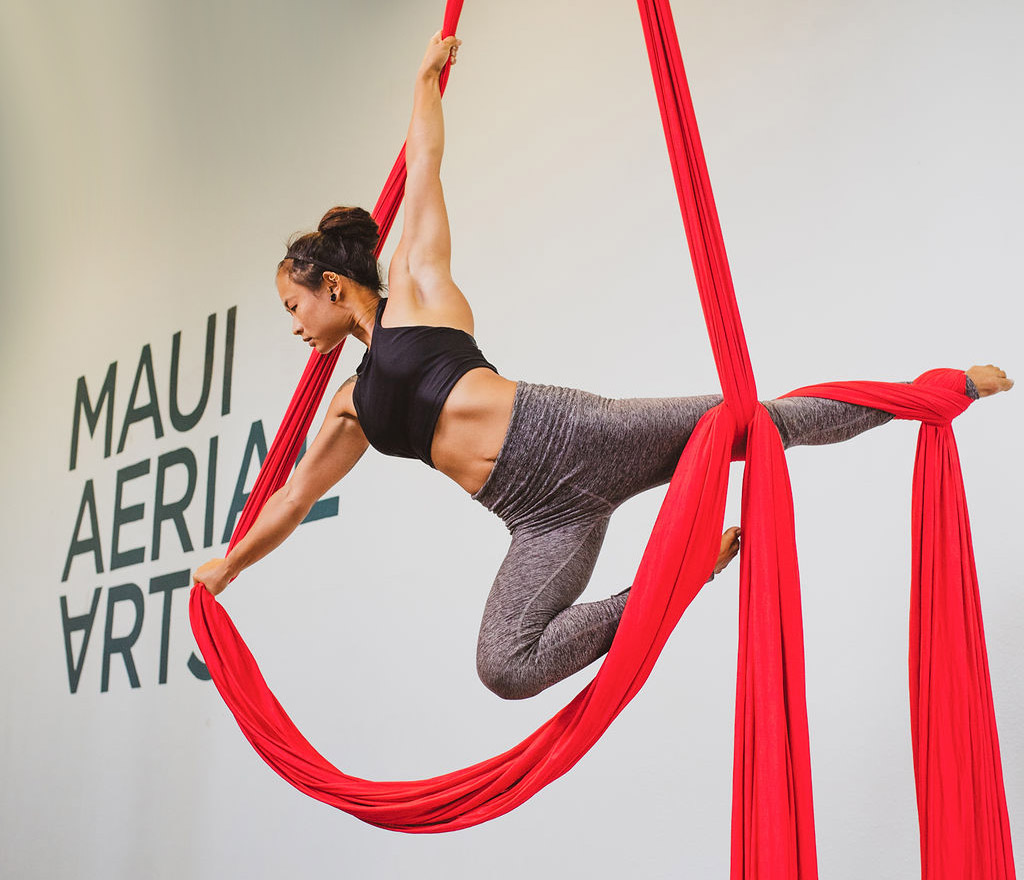 Born and raised in New Mexico, Mei has always been inspired by physical movement. Mei moved to Los Angeles for a change of pace and more opportunities. She took her first aerial silks class at Hollywood Aerial Arts and was hooked. Since then Mei has trained at various studios around LA such as The Loft, Fit and Bendy, and Cirque School LA under some of the best circus instructors Los Angeles has to offer. Mei specializes in aerial silks, lyra, hammock, tippy hoop, and aerial doubles while working on her handstands and flexibility. Working as a professional aerialist for many years, Mei also took on teaching her passion for aerial. Mei has taught at many circus and fitness studios around LA. To name a few, Believe Fitness Studio, The Loft, and Jagged Vertical Fitness. In this time, Mei has also obtained her 200hr yoga certification to help her understanding of the human body and has since taught yoga for many years as well as group fitness and kids circus. 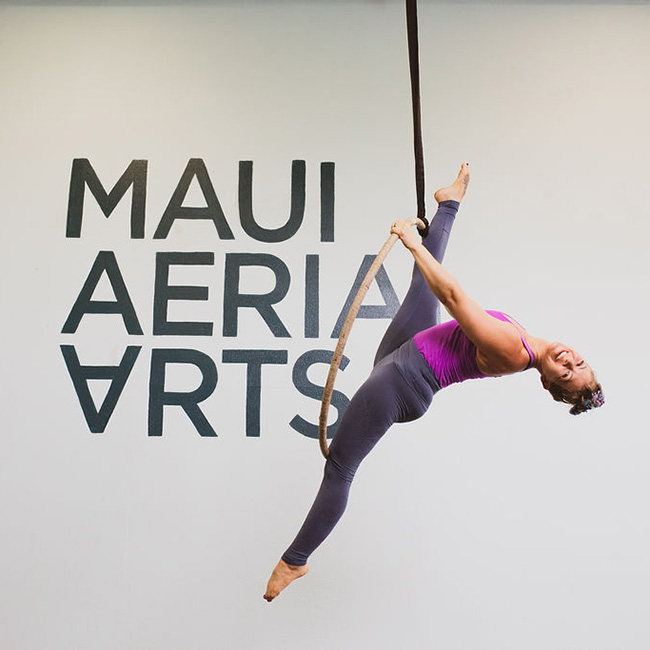 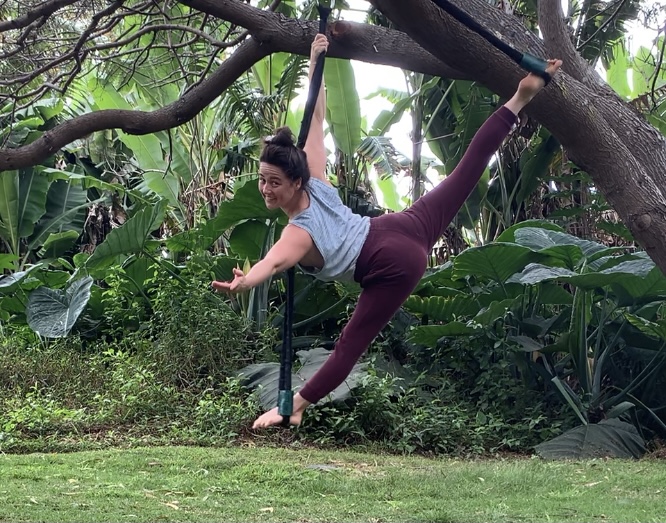 Ginger found aerial in 2015 and it quickly became a passion. Coming from a theater and dance background, she was happy and fortunate to train and perform in a great variety of acts during her collaboration with popular Los Angeles aerial studios. Ginger is an accomplished aerialist who has won national and international aerial competitions in both solo and doubles acts. She began teaching youth silks in 2016 and later started teaching adult lyra, rope, dance skills for aerialists, partner acro, silks, and trapeze. Ginger loves telling stories through aerial arts and plans to continue learning, experimenting, and creating until the end of time. 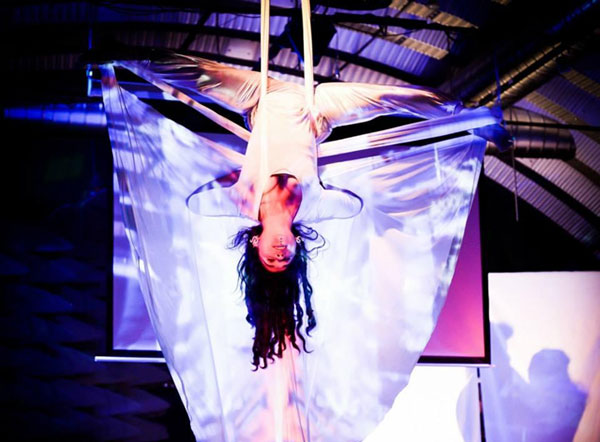 Ariel grew up learning and loving every form of dance! As she kept discovering her love for movement, she started training in aerial circus arts, focusing on silks and lyra. Ariel started training with Night Flight Aerial in 2011, based in Portland, OR, and then moved to Taos, NM, where she trained with Christina Sporrong and The Revolving Door Circus. After her adventures in New Mexico, she moved back to Oregon, where she did yoga teach training in Eugene at Everyday People Yoga. Ariel has been a registered 200-hour Yoga Alliance certified teacher since 2014. She is excited to teach, play and grow here on Maui with the amazing community! 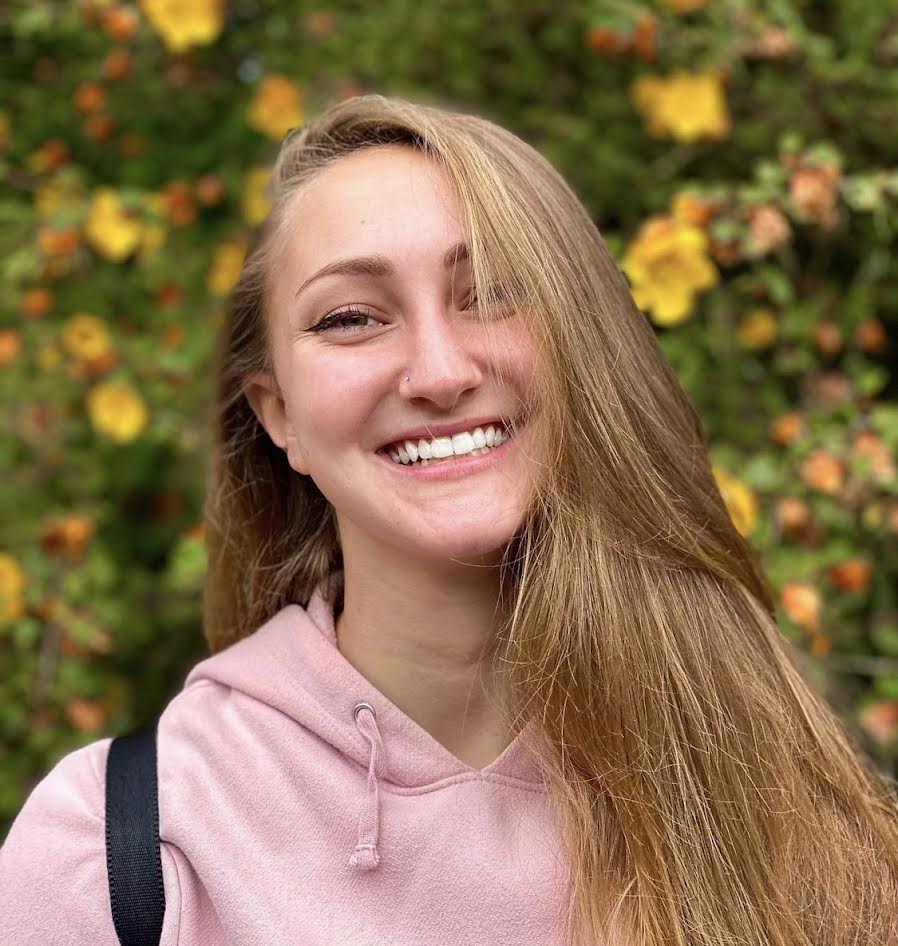 Caye is an aerialist who teaches Silks, Hammock, and Lyra to both adults and kids at our studio. She is also a training instructor for pole and HIIT. She previously worked in the Bay Area, and grew up overseas until graduating high school. With a background in gymnastics, she naturally found her way into the circus community in college. From training to performing and teaching, she feels most like herself when spinning and enjoying life from this wonderful upside-down perspective! 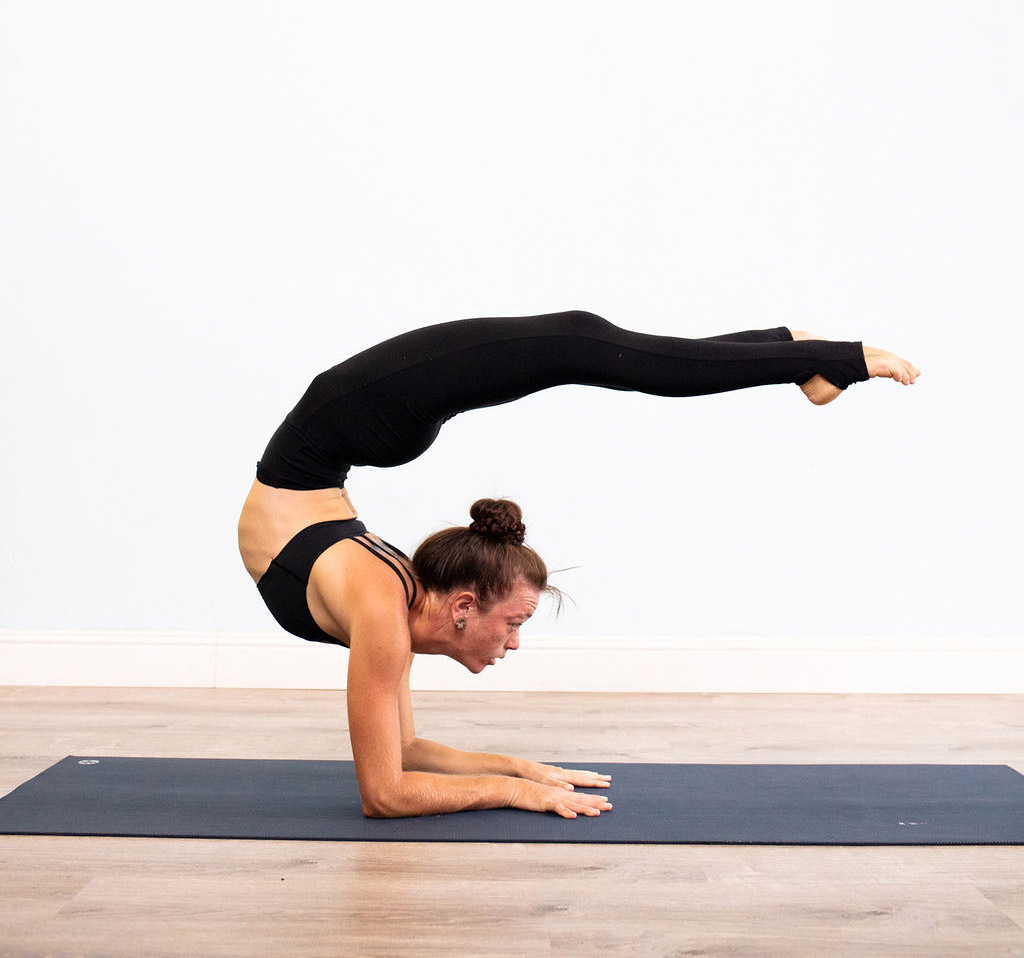 Tanner Wagner is originally from St.George, Utah and has lived and worked on Maui for 3 years. He is certified in Integral yoga and Pilates and has been teaching for 9 years. Tanner teaches Pilates with emphasis on rehabilitation, postural awareness and athletic cross training. In addition to his movement background, he is a a licensed massage therapist which adds to his skill and knowledge in teaching movement and observing posture in the human body.

In his free time, Tanner loves to move and work his body in nature by hiking, surfing, snorkeling. He enjoys a good challenge to his mind, body and spirit and he strives for fluid, strong and comfortable movement in his body. His intention is to teach fluid strength and comfortability in one’s own body. 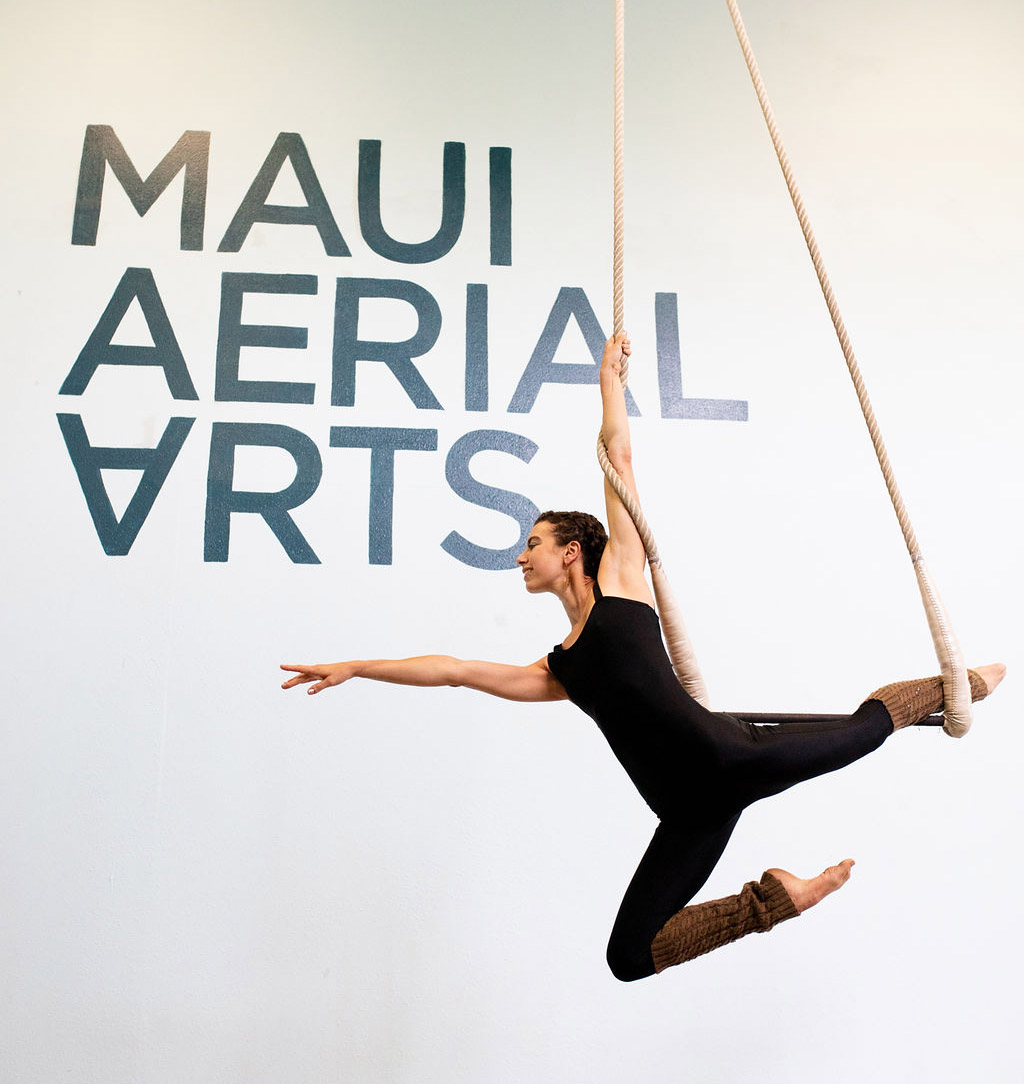 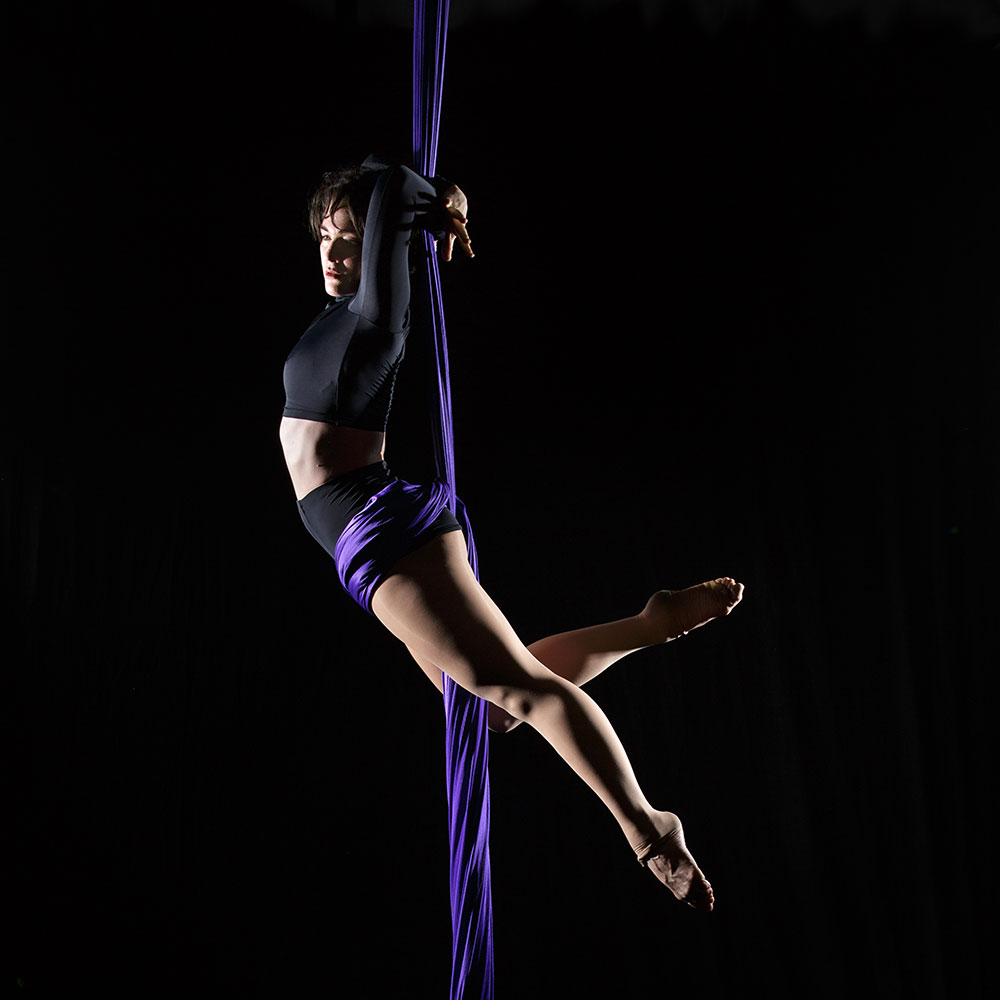